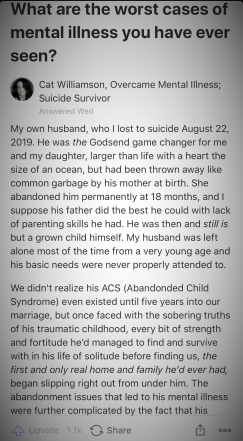 It was indeed a rainy day here in Dallas on February 5th. The kind that tends to make you want to just shut the world away. But then again, not so much. With cozy pajamas, fluffy slippers, an ox of a German Shepherd named Lord Williamson at my feet and three cats perched strategically out of his reach all around me? Yah, that’s my vibe! The night before I’d been directed to “Quora”, a question and answer style on-line forum that I’d never heard of. So, after taking Gia to school I got home, made a giant cup of coffee and sat down to check it out. At first glance, I thought, “Wow, this could be interesting”, then I threw a quick profile together, circled back around to the home page, and this was the first question I saw: “What are the worst cases of mental illness you have ever seen?” Really? “Well okay then …”, and off I went (with the Twilight Zone music cued up in the background). This was my answer:

My own husband, who I lost to suicide August 22, 2019. He was the Godsend game changer for me and my daughter, larger than life with a heart the size of an ocean, but had been thrown away like common garbage by his mother at birth. She abandoned him permanently at 18 months, and I suppose his father did the best he could with lack of parenting skills he had, but he was then and is still but a child himself. My husband was left alone most of the time from a very young age and his basic needs were never properly tended to.

We didn’t realize his ACS (Abandonded Child Syndrome) even existed until five years into our marriage, but once faced with the sobering truths of his traumatic childhood, every bit of strength and fortitude he’d managed to find and survive with in his life of solitude before finding us, the first and only real home and family he’d ever had, began slipping right out from under him. The abandonment issues that led to his mental illness were further complicated by the fact that his entire family abandoned him; neither the mother, father or three older siblings could be bothered with him. This heartless, selfish, ice-cold brood of people literally broke his heart into pieces that could never be put back together.

There were demons living in the hole they burned into his soul we fought desperately to keep him from drowning in, but in the end, the demons won. The last months of his life it appeared that he was in the early stages of psychosis, if not schizophrenia. He’d been hearing voices, seeing things, missing “blocks of time”, and ultimately just vanished completely within himself. He said he couldn’t “feel anything” anymore, and honestly, we lost him months before he put that gun to his head. It was a living nightmare to witness and the worst kind of heartbreak to suffer. He died of a broken heart that led to his mental illness and then suicide.

I’ve been writing tirelessly about not only his, but my mental health journey as well, in “The Diary Of My Perfection” dot com. I’d be honored if any of you would care to read, follow or share it, as it is now my mission to try and be a Light in other people’s darkness.

Once I’d completed and submitted it, it was time to switch gears to the work day that lied ahead, which I did, and soon thereafter I was out the door with absolutely no idea what, if anything, would become of my answer to the question. Keep in mind that throughout the day I had noticed the “push” notifications on my Quora app were beginning to skyrocket. NOT GONNA LIE … I was nervous! I kept thinking, “Oh no, what’s with all these notifications? 25, 50, 75, 100, 150? Have I upset, offended or pissed someone off? Have I invoked some drama with the masses? Holy shit! What the Hell? What have I done?” But I had so much going on that day that I couldn’t allow myself to open the app and look, for fear that what I may find would somehow distract, upset or topple me. So, I just went on with my day and anxiously waited until I got home to open the “Pandora’s Box” I was worried I had created.

When I finally got back to my desk that night, I took a deep breath and logged back on to the site. I WAS STUNNED! Much to my overwhelming surprise I found that my answer had been viewed upwards of 22,000 times, “upvoted” over 2,000 times, and responded to hundreds of times, with uplifting, supportive and reflective comments such as this:

Thank you so very much for sharing this difficult journey with others. You may have just saved my life by giving me enough information to try to find a path out of my personal jungle.

Until I read your post I had never heard of “abandoned child syndrome”. I now have SOMETHING that points to the root of my problems! NOW I’m starting to understand myself just a tiny bit more than I did 10 minutes ago.

The question is now what can I do to start forging a different future? I am 50 years old and feel like a boat without ears, a sail, and a rudder. Or is it too late to try to move forward? I feel like it’s just too much and I’m way too tired to keep trying.

Thank you for putting your grief into action and attempting to save other’s. I think I’m simply too old and tired …”.

And there you have it! Confirmation that every single thing I’ve walked through and survived in my 50 years thus far is going to mean something so much bigger than I could possibly have ever foreseen to someone, somehow, some way, if I just keep on keeping on. Everything my husband had to walk through is going to have meant something bigger than even he was and I am going to make sure of it!

One of the things I loved most about Zack was his unrelenting generosity and heart for others. It was not uncommon for him to “give or do”, if not even to random strangers; the more he acquired, the more he gave away. We shared that in common, which is not to toot a horn right now, but rather, to make this point: Whenever we’d done something for someone else we would always “fist bump” or “high five” each other afterwards and smile. So, yah, after reading that comment above? I actually did pause as I turned to his picture on my desk and sent out my half of our “fist bump” to wherever he is in this cosmos. This is what I’m supposed to be doing! I know it. He knows it. God knows it! I’m just gonna keep staying “small” so all this can become so much “bigger” than either of us could have ever imagined. I feel so extremely blessed, happy, and even more determined to do whatever it is I’m supposed to do than I was before. That is all.