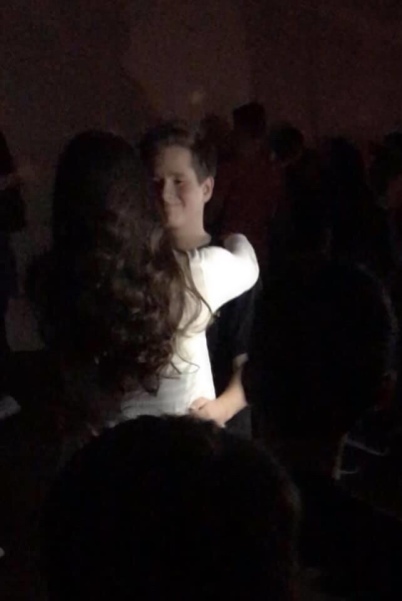 THIS. On this night I watched my baby girl take the center of the stage as the first boy she ever really had a crush on gave her “the first dance”. To fully appreciate this, you must first travel back with me to “the day of the ball on the playground”. It was 4th grade for her, 5th grade for him, during one of my playground shifts their school. I was sitting on the curb, kinda not paying attention, until I happened to look up at just the right time to see her and her friends playing four square. The ball they were “squaring” got bounced off their court and started rolling towards the basketball court where some boys were playing. So, the ball was just rollin’ and the girls were all panicking, because “OMG it’s headed for ALL THOSE BOYS”! The next thing you know, this very handsome young man stopped the ball with his foot, picked it up and started walking towards the gaggle of panicking girls!  But it didn’t end there, you see, because that handsome boy decided to invite himself to their game. When recess was over, I followed the girls back into the school as they all giggled and snickered amongst themselves, “Can you believe it? HE’S A FIFTH GRADER!” From that point on, “Sawyer and Gia” were a thing, but only on a first real crush level. He liked her. She liked him. It was the sweetest thing ever. AND I GOT TO SEE HOW IT STARTED! Fast forward to THIS night, the middle school Fall Dance, and here’s how “the day of the ball on the playground ended” …

Williamson and I were chaperones at the dance this night, which is par for the course with us. It was just about over and a bunch of us parents were just kicking back on the outskirts of the party when one of the dads noticed a commotion wherein every kid in the room was engulfed in “some thing” on the dance floor. That dad ran over and stuck his head through “the wall of kids” only to run back and report that, “Holy shit guys, they’re dancing. THEY’RE DANCING!” “Who’s dancing”, Zack said. “Uhh, YOUR DAUGHTER AND SAWYER SMITH, that’s who!” From thence it’s just history. For the record, how lucky am I  that no matter where this “first love of hers” either does or doesn’t go, I got to watch it from the beginning!