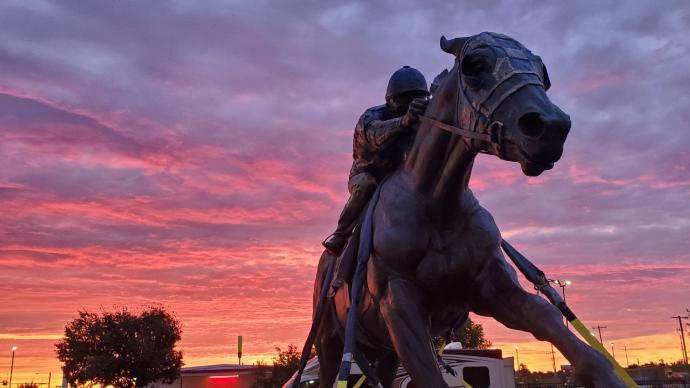 I was only four years old at the time and so far removed from anything to do with horses it’s almost comical to think that through my daughter I, no, “we” as a family are now in the fledgling stages of this world. Meanwhile, today Gia and I watched Secretariat for the 21st time since we first saw it when she was five (and yes, she’s counted and today was indeed 21). In fact, it was the second movie Williamson and I took her to as a “family”. This morning was special however because of the discussion we had that followed:

“Momma, who does he remind you of?”

“Hmmm, there are actually two people that he reminds me of, and I’ve always thought it. So I’m curious to know if we think the same way.”

“Well who’s the one man we know that no one had faith in? The one no one believed in. The one that everyone said was going to be the worst thing that ever happened to us? The one they never saw coming? It’s daddy. He’s OUR very own Secretariat!”

“Well Gia I’m so proud of you for making that correlation. I feel the same. Except, who ELSE do we still need to have faith in so HE can run HIS race?”

If you’ve never seen the movie or read about “The Horse That God Built”, do it! It’s so much more than about that horse. It’s the story of what can happen when one living creature truly believes in another and how faith can make miracles out of anyone or anything. It’s what made OUR little family what it is today – a miracle!

If there was ONE moment in time that I could have witnessed it would be the June 9, 1973 Belmont Stakes when that magnificent machine defied EVERY odd stacked against him. It’s okay though, I’m lucky enough to be surrounded by people that I will never stop believing in as I watch them “run their races”! Okay, that is all.

This is a text widget, which allows you to add text or HTML to your sidebar. You can use them to display text, links, images, HTML, or a combination of these. Edit them in the Widget section of the Customizer.
%d bloggers like this: